Have you been thinking about recording a voice over demo? Perhaps you are newer to voice over and have done the study required to perfect your skills in a particular genre and are ready to record a demo to show the world your mad voice over skills.  Or maybe you’ve been in this industry for a while now and your demo library could use some updating (MySpace spots anyone?).  Wherever you are in your voice over business, when you need a voice over demo, you need the Demo Dream Team.

Who IS the Demo Dream Team?

The Demo Dream Team is four friends uniting to collectively bring decades of professional writing, producing, engineering, coaching, and acting expertise to the world of demo production! The members of this fab four are: 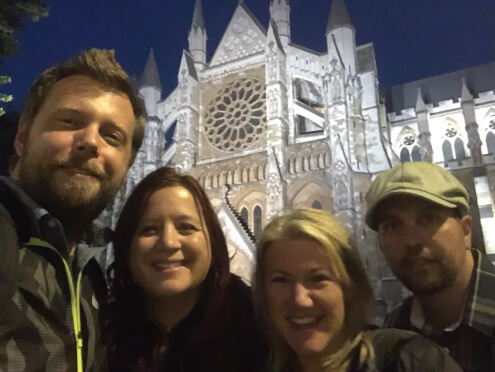 When she isn’t recording in the booth or making her handmade vanilla caramels for her clients, Michelle manages and directs her two sons Everett and Ashton Sundholm (The Sundholm Brothers) in the vocal booth, helping make their dreams become reality through creativity, dedication and hard work.

Steve Sundholm’s had a long career in audio production, with engineering credits on projects with such artists as Carrie Underwood, JET, Pink Martini, and Forest Whitaker. Other production highlights include collaborations with Jim Brickman, Kenny Rogers, and John Oates. Steve has written music for Disney, Mitchel Musso, Cloverdayle, and Jim Brickman among others. And Steve’s mixes have been used on advertisements for CBS, Tampax, and more, as well as TV shows like The Jimmy Kimmel Show, Dawson’s Creek, and America’s Next Top Model. His mixes have also been on national radio and the Billboard Charts. And just when you thought the list couldn’t get longer, he’s also done audio mastering for the likes of Merle Haggard, Lady Antebellum, Yoko Ono, The Pretenders, Machine Gun Kelly, and Joan Jett.

Melissa Disney is a 3-Time EMMY Nominated Actress whose numerous credits include Live Announcer for the Oscars, Emmys and the Billboard Music Awards, promos for NFL, HGTV, The Young and the Restless, ABC, CBS, Fox, On-Demand, as well as the voice of numerous radio stations across the U.S. On TV she is the coolest queen of the nerds, Ginger Foutley from Nickelodeon’s “As Told By Ginger” as well as starring AS the newest Marvel Superhero -American Dream, The Simpsons, Jakers! with Mel Brooks, Superman, and other currently top secret video games. You’ve definitely heard her in campaigns for brands such as McDonalds, Lexus, Sprint, Doritos, Ford, Hallmark, and the viral Motherhood commercial for Similac. Musically, she has been the singing voice of Snow White and has been the voice for numerous toys, dolls, and albums, Voice of new Star Wars characters on Disney theme park rides, as well as the voice of the Carousel in Shanghai Disneyland. She has performed Sketch comedy on The Tonight Show, Jimmy Kimmel and Conan O’ Brian and worked with Anne Beats of SNL.

Melissa is also known as the “1st Female Voice of Movie Trailers”. Winning the Key Art Award winner for Best Trailer– Gone in 60 Seconds with Nicholas Cage, ”Melissa effectively shattered an unwritten ban on women voicing action trailers, And as if that were not enough, she went on to win a Golden Trailer Award (Best Voiceover) for her work on the Warner Bros. Pictures’ 2001 movie Valentine.”
(— Natasha Emmons, Hollywood Reporter ).

You may wonder if there is an award for writing for either stage or screen that critically acclaimed comedy writer, Ryan Paul James hasn’t won (he’s won more than 20 for his work). He’s been compared to Neil Simon, with one critic calling him “The Neil Simon of his generation”. Others have noted, “Ryan Paul James is an American playwright to watch”. Ryan has written ten plays that have entertained audiences all over the world. He’s been recognized in both newspapers and magazines as being one of the funniest writers in theatre. Ryan has also written for television and has created TV shows that have gotten the attention of some major networks, written for documentaries, blogged and written numerous articles. When he’s not writing, Ryan is busy teaching writing and storytelling in Los Angeles.

Choose us for Experience and World Class Treatment. Together, we have decades of professional expertise in each relevant industry field (Writing, Engineering, Producing, Business, Coaching, and Acting). We know and understand current trends in the market first-hand and have a proven successful track record to show for it. We are grounded, innovative, passionate dreamers and we cater to your specific needs and style, getting to know YOU as the voice over talent, and what would suit you best. We also create custom scripts specifically for your voice and stand behind our results.

We are here to help you get to the next level in your career and we understand the importance of a demo as your calling card/business card. It’s your first impression and sometimes the most important impression you will make with buyers or agents. Your demo must represent you and what you do best.

Today’s voiceover market is more competitive than ever and your demo needs to rise above the rest. We will not do a demo with someone we feel is not ready. Each potential client will get a free 15-minute consultation with one of the team members to make sure our collaboration is a mutual fit. We believe in excellence as artists and we will get it done right the first time, or work until you have approved the final demo 100%.

What Are Our Rates?

Audio demo rates vary by demo type so be sure to contact us directly here, for details.

NOT INCLUDED in the demo package, is the studio fee and any transportation costs needed if you cannot connect directly and record from your home studio (or other studios near you) or meet Melissa and Ryan in LA or Steve and Michelle in Portland in their broadcast-quality studios.

The Demo Dream team blew my mind with the product I received! A long time ago, in a galaxy far far away (prior to life as a mom,) I worked as a voice over artist. Just thought I’d venture back into that world, basically starting from scratch, and through providence, I found the Demo Dream team. Remembering from long ago, I don’t believe I’ve ever had such a joyful and efficient brilliant on all levels team effort to create, coach and engineer my demo reel(s)! Now, if only they could be my agent as well…. I’m recommending all my actor friends and want-to-do-voiceover friends, alike, to The Demo Dream Team!

What a great team to have working with you on a demo! And as I do more and more of these, I’m getting pickier and pickier. 😉 The process couldn’t have been smoother, more rewarding or more fun. Everyone involved knows their stuff and the end result is a demo I’ll be proud of for many years to come. Thank you SO MUCH!

**Booked directed demo session Rescheduling Policy: Please provide at least a 72 HOUR rescheduling of your initial booked session. We realize schedules can be crazy, but we’re working pros as well and need a solid heads up.**

We are ready to meet you, get to know you and create something that brings out YOUR unique signature sound!

Contact us for a free 15 min consultation.
Let’s get creative and take your demos to the next level.